You are here: Home / The Faraway Blog / Nyala – the shifty one 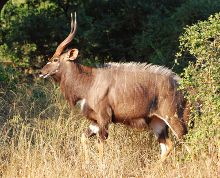 Beautiful as they are even the spiral horns have an aristocrat. It’s one thing to see nyala in a book but quite another in real life. They are simply so improbable and exotic – white mane and stripes, spots, orange legs and ivory tipped, lyre shaped horns. When they appear at a waterhole it’s like watching a supermodel stepping onto a bus.

The common species lives over much of southern Africa, both in natural range and transplanted into new territories in Namibia and the Limpopo, but their heartland is KwaZulu Natal. That’s where they occur in number and where the best trophies have traditionally come from. Transplanted populations have yielded some good trophies but hunting them can be an expensive proposition. As with eland there is a larger cousin, in this case the mountain nyala of the Bale massif in Ethiopia. It’s one of the most difficult and expensive hunts in Africa and an unlikely destination for the first timer, so let’s stay with the southern species.

Some hunters can be a little condescending about South African safaris, without taking into account the tremendous variety of free range hunting still available there. Even today Zululand offers a wide choice of vast blocks with good populations of nyala. The name, obviously enough, translates as ‘the shifty one’ and for good reason. They are cover-loving game and solitary old bulls will happily run rings around an unimaginative hunter, circling back, lying low and using every trick in the book. Don’t ask how I know that – they may be pretty but they aren’t stupid. (The exception might be the bull in this photo. I snapped it while he was totally oblivious and in full display, all fringes extended, with his girlfriend looking on. Probably a moral in there somewhere.)

Stalking is typically a morning and evening proposition, and it’s not a bad idea when glassing promising country to do it twice. For such an exotic looking creature nyala fit into their environment so well that it’s easy to miss them.

A nyala hunt is a thing to be savored. It isn’t as simple, harsh and physical as a mountain hunt, but more like chess – a lot of thinking, watching and stealth. It’s a unique experience…even by the standards of Africa.

This is Coutada 11 in Mozambique, a conservation and hunting story like no other. There are no fences, just millions of acres of wilderness rolling to … END_OF_DOCUMENT_TOKEN_TO_BE_REPLACED

For all her modern adornments, there are still glimpses of the old Africa to be found. Tiger fish will take you there. 'The camp staff will have been … END_OF_DOCUMENT_TOKEN_TO_BE_REPLACED

Blessed are they who have earned the love of an old dog. 'The truly great times with a field dog tend to be short. By the time they’ve learned a few … END_OF_DOCUMENT_TOKEN_TO_BE_REPLACED

Argentina, I think I love you.  Blackbuck ram in one of the deep morning mists that transform the palmetta country into a wonderland. A nice stalk but … END_OF_DOCUMENT_TOKEN_TO_BE_REPLACED

'It's the eyes you see first. Not that great muddy cape, not that muzzle twisted in rage or the nostrils flared and ready for battle. It’s not even … END_OF_DOCUMENT_TOKEN_TO_BE_REPLACED